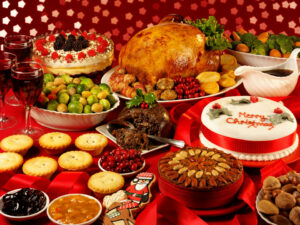 Invariably one’s own culture dictates the types of dishes to be served over the festive season, but this article will feature typical fare from other countries and readers are asked to please forgive the writer for errors that arise, not totally au fait with many cultural traditions.

South Africa and many other countries were once part of the commonwealth under British rule and adopted foods familiar in England, which have lingered on with some. However with the advent of the “rainbow nation” gradual changes were of great advantage to the population.

Significantly three items namely the roast turkey, mince pies and Christmas pudding appear to be essential this time of year, but the making of these has changed through time.

Mince pies originally contained meat like lamb and were made in an oval shape to represent the manger in which Jesus slept. In one era these pies were a status symbol; wealthy people showing them off in different shapes.

In medieval England the Christmas pudding was created with meat, fruit, wine and spices.

The history of cookies dates back to 7th century Persia, one of the first countries to grow and use sugar. These  “pastry patties” were actually used to test the heat of the oven, never intended for consumption. Eventually with the growing spice trade these cookies became edible and their popularity spread to Europe and elsewhere.

The Americans have come up with a creative dessert with a rather strange name “Cherpumple pie” having cherry, pumpkin and apple layers.

Pumpkin is about American as one can get but was not always favoured. The very early settlers received pumpkins as gifts from the north eastern natives. One assumes that with time the pumpkins became acceptable and used in creative ways !

Some amazing desserts, delicious, but although rather foreign to some are served in countries elsewhere.

In the Yemen, chocolate and cheese pancakes originated as street food, becoming so popular that they became familiar across the Arab world.

Turkish chefs are never afraid of including chicken in a dessert, based on an almond and chicken pudding served to the sultans of the Ottoman empire.

An exotic ice cream with flavours that surprises the mouth is the Indian Kulfi,  flavoured with rose, mango or saffron and could contain spices, fruit and pisctachio nuts, truly mouth-watering with dense flavours.

We are all familiar with the saying “save the best for last” but this makes one wonder who can afford the world’s most expensive delight that being The Sultan’s gold cake taking 72 hours to prepare, the ingredients include figs, quince, apricots and pears drowned in Jamaican rum for 2 years. Once baked the “grand finale” involves a topping of caramel, black truffles and a dusting of 24 karat edible gold.

This magnificent creation is available in Istanbul.

Whether one bakes an extravagant Christmas cake or purchases one from the supermarket, some extra indulgence is acceptable. However, one should take time to reflect on the essence of the period showing tolerance, putting aside hatred and bitterness and reflecting on much goodness in mankind.

Sandy Harvey the writer would like to extend best wishes to all readers and their families for a safe and happy festive season!