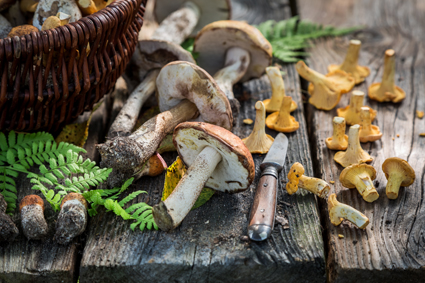 The most incredible tales exist surrounding mushrooms. Ancient human culture documented reveals a mushroom cult dating back 7000 to 9000 years with details of harvesting, adoration and offerings to the gods.

In ancient Egypt only royalty were permitted to eat mushrooms as they were associated with immortality and in medieval England, folklore dictated that mushrooms should be picked only at full moon and if they appeared in a circle were labelled fairy rings with the presence of these mysterious creatures !

Despite those rituals, it is a fact that 200 species of this fungus exist and that many consider mushrooms to be dull and boring as some are rather bland and strange in appearance.

For those who are weight conscious they contain little fat, carbohydrates and sugar and the Portobello variety has more potassium than a whole banana.

As for cancer treatment, Eastern cultures have used mushrooms for centuries, the Chinese in particular in their traditional medicine.

Because of the wide variety available , confusion and ignorance can exist, so the following descriptions will give clarity :

BROWN MUSHROOMS – these are fleshy and have an earthy taste and most varieties are used in salads, raw if acceptable, or cooked with sauces and meats.

BUTTON MUSHROOMS – the most common, pale in colour with a subtle earthy flavour best baked or roasted.

OYSTER MUSHROOMS – much favoured in China, Korea and Japan – these have a soft velvety texture with a slight anise flavour, frequently used in stir-fry foods.

SHITAKI MUSHROOMS – these are an eastern sensation with a strong, smoky aroma and in a dry form can add strong flavours to many dishes.

PORTOBELLO MUSHROOMS – these are extra large and are aesthetically pleasing. Cooked whole, they make a pleasing starter filled with bread crumbs, cheese and chopped ham.

SHIMEJI MUSHROOMS – this variety originated in east Asia, being nutty and somewhat crunchy even after being cooked. These are ideal in soups, stews and sauces.

TRUFFLES – like mushrooms, these are also fungal in origin, grow underground and are extremely rare and costly, found mainly in Europe and the middle east. Trained dogs are able to sniff their location and dig them out. French black and white Italian truffles are the diamonds in the culinary world !

We now come to the topic of “Funguphobia” relating to those who loathe the very thought of eating a fungus despite the fact that they play an essential role in nature with a role of recycling and decomposing dead organic matter back into the environment .

Those with phobias see them as “creepy freaks that come out at night and belong on the garbage heap” and yet the realization exists that other very bizarre foods find their way to countless dinner plates such as slimy octopus , bugs, brains , frogs legs, tuna eyeballs, 100 year old eggs and a variety of animal intestines …

Be it cultural or some form of indoctrination – fortunately we humans have a choice !!

Hopefully this weeks article will inspire readers to experiment with these rather strange outgrowths & enjoy at the same time !